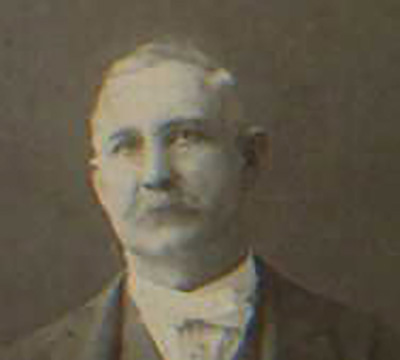 William Grabach was born on July 20, 1857 in Fremont, Sandusky, Ohio. He was the son of Augustus Grabach and his wife Maria Elisabetha Setzler. Augustus Grabach was born in Germany in 1818. At the age of 22 he boarded the ship Graville in La Havre, France and sailed to New York City, arriving on May 31, 1840. He married Elizabeth Setzler by 1842 and settled in Ohio, where all of their children were born. Maria Elisabetha Setzler was born on November 16, 1821 in München, Bavaria (Bayern), Germany and came to the United States in 1834. She had 10 children, 8 of whom were still living in 1900. Augustus had a small farm in Fremont, Sandusky, Ohio, valued at $200 in 1850, but increased his holdings to $1,000 in Real Estate by 1860 when they were recorded in as living in Adams, Seneca, Ohio. He got a fever in March of 1860 and died a week later on March 16th. He was said to have been a Master Mason on the census at the time of his death. His eldest son John was a Masonic Apprentice on the 1860 census. This undoubtedly refers to operative Masonry and John was likely apprenticing with his father at the time. They must have just moved to Adams, as the probate papers for August said the deceased was formally of Fremont, but he died in Adams (Adams is about 10 miles from Fremont and about 8 miles from Clyde). William was not yet 3 years old when his father died. Soon after the Civil War broke out, William’s older brother’s John and Augustus joined Company D of the 3rd Ohio Veteran Volunteer Cavalry regiment. From 1862 to 1865 they fought in many major engagements including Gallatin, Murfreesboro, Stones River, Chickamauga and Kennesaw Mountain. Augustus was captured by Confederate forces at Lovejoy Station on August 20, 1864, he died in 1869. John moved to Portland, Oregon and was a member of the Portland GAR Post 12. In 1870 the family was found on the census as Greyback. They were mostly still in Adams, Seneca, Ohio, with John having left the household and Augustus dying on May 13, 1869. Elizabeth had increased the family holdings to $2,000 in Real Estate, with $400 in personal assets. George was now 21 and was working as a Day Laborer; Philip age 17 was a Farm Laborer and William age 14 was a Salesman, Charles age 12 was still in school.

William Grabach was not found on the 1880 Census, which leaves a 30 year gap in the Federal record (1870-1900). Piecing together what happed during that time was a challenge as William seems to have moved frequently. As best as can be determined William Grabach married Maggie Harrison in about 1882. The couple had three known children: Maggie May in 1883, William in 1885 and Paul born on January 2, 1886[1] in Clyde, Sandusky, Ohio. According to her marriage record Maggie May Grabach was born in Springfield, Illinois in 1883. There is a Decorator named William Grabach living at 295 English Ave. in Indianapolis, Indiana in 1884, but we have no proof it is the same man. The Directories for Clyde, Ohio for 1886 and 1887 show that during this time William and his younger brother Charles were working under the name “William Grabach and Brother”. They offered practical fresco work and scenery for Opera house and theatrical companies.[2] There is another Directory record that shows a William Grabach, Painter rooming at 82 Abbott in Detroit, Michigan in 1891. Here again the connection is tenuous. It is apparent that William relocated often, he was said to have been in Missouri, and he was certainly in Minnesota for a while. By 1896 William had gone to Omaha, Nebraska, where he was a Scenic Artist at the Creighton Theatre. He was living at 1817 Davenport in Omaha. “The current site of the Omaha Orpheum Theatre was previously home to the Creighton Theater. John A. McShane organized a stock company to build the original theater in 1895. The architects for the original theater were Fisher & Lawrie and the general contractors were Rocheford & Gould. Paxton and Vierling installed the iron curtain that weighed 11 tons. The theater was named after John A. Creighton, a local philanthropist, and a large portrait of Count Creighton decorated the proscenium arch. The Creighton Theater was eventually added to the Orpheum Circuit, which by 1900 had expanded to nine western cities: Omaha, Chicago, Kansas City, New Orleans, Denver, Salt Lake City, Los Angeles, San Francisco and Sacramento. The reference to Creighton was eventually dropped from the theater’s name.” [3] The 1897 Julius Cahn’s Official Theatre Guide shows William Grabach was doing the Scenic work for both the Creighton and Boyd Theatres. In 1898 the Artist William Grabach was residing at 203 24th St. in Omaha The 1900 Census shows that Maggie Harrison was no longer in the picture, and it is assumed she died. A record in Butler, Ohio shows that a William Grabach married Carrie Zeller on February 10, 1887. It is not clear if this was the wife of William Grabach shown on the 1900 census, but what can be decrypted is questionably consistent with the possibility. 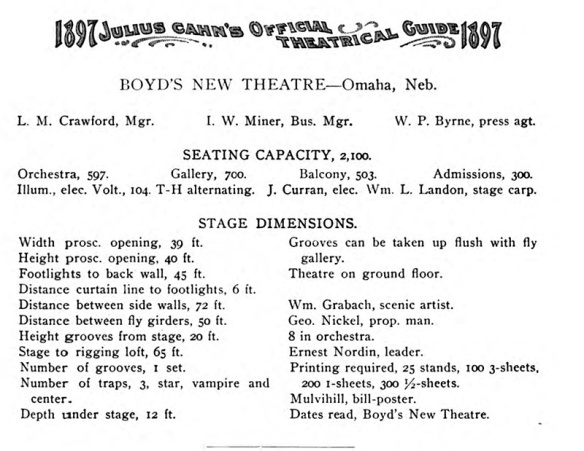 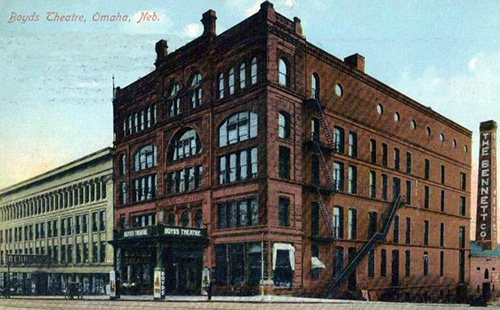 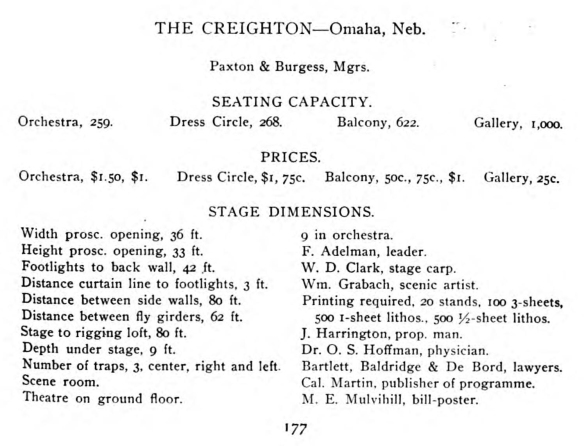 On June 23, 1899 Maggie May the daughter of William Grabach and his wife Maggie (Harrison) was married in Glenwood, Mills, Iowa, which is about 15 miles from Omaha. It is from this record that we learned the name of the mother of William Grabach’s children. Maggie Grabach, was born in Springfield, Illinois, according to her marriage. She married John L. Glazier, a Newspaperman living in Omaha.

The 1900 Census shows that the wife of William Grabach, whose name is difficult to decipher, had no children and the couple had been married for about 12 years. Also in the household was a son Paul Grabach, born February 1884. This record shows that the birthplace of Paul and his father William was New York. This was most certainly not the case. William’s birthdate is also wrong and is shown at Jan. 1855 and Paul’s birthdate was January 1886 not Feb. 1884. We might suspect that we are on the wrong track; however, later records rejected that theory, and the Census records are notorious for having erroneous information.

William Grabach was in Omaha through 1901, and then it appears he went to Chicago. On July 20, 1903 William Grabach married to Romelia M. Burton Hayes. William was living in Chicago, Illinois and Romelia lived across Lake Michigan in Benton Harbor, Michigan. The wedding took place in nearby St. Josephs, Michigan. William is noted to be the son of August Grabach and a Scenic Artist, and his bride was born in Minnesota. Each were said to have been married once before, but in the case of William it appears it should be twice previous. It is believed that Grabach worked for Sosman & Landis while in Chicago. 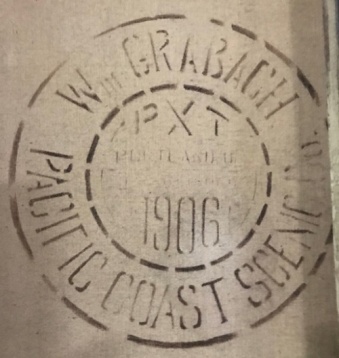 In 1905 William Grabach took his family and moved to Portland Oregon where he painted scenery for the Belasco Theatre. He opened the Pacific Coast Scenic Co. as can be seen on the back of one of the drops at the Scottish Rite in Portland and in various Directories during that time. He soon after started working for the Portland Scottish Rite, and was producing drops by 1906, if not sooner. In 1906 he was rooming at 488 Washington in Portland. His studio was at 43 14th N. in Portland, as shown in 1906-1908 records. However his residence in 1907 changed to 432 Manzanita. 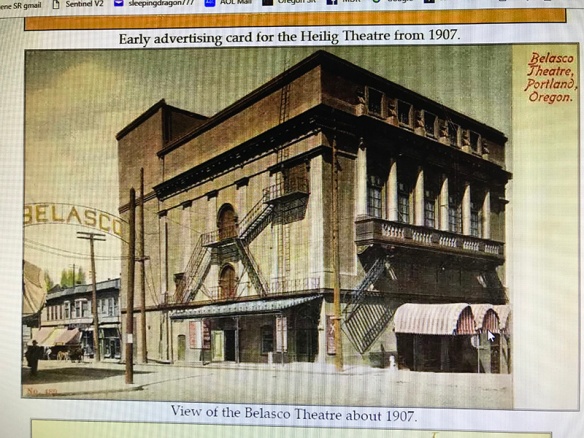 His studio was at 383 ½ 5th St. in 1909. In 1910 his business and home residence was at 634 Front St. in Portland as shown in the Directories and the 1910 Census. The information for William Grabach in the 1910 Census was more accurate than in 1900, but there were still a few anomalies. His wife is listed as Emma, apparently a nickname for Romelia. William again claimed that this was his 2nd marriage, but it says that they were married for 15 years instead of 7 as would be expected. Emma is shown to have had 3 children, none of whom are living, unlike the wife of William in 1900 who had no children at all, and neither of those relationships accounting for the three children of William Grabach and their mother Maggie (Harrison). Most of the rest of William’s family were also living with him in Portland in 1910. The eldest daughter Maggie May was going by the name Marie Glazier and was a Vaudville Actress. His son William Grabach, Jr. was a Farmer living with his father and his wife Edna. William, Jr. married Edna Myrtle Hopkins on January 8, 1906 in Pueblo. Colorado. Paul Grabach again shows up but this time his birthplace was listed as Ohio. Paul worked as a stage hand and Carpenter and in 1909 he was a Flyman at the Star Theatre in Portland. 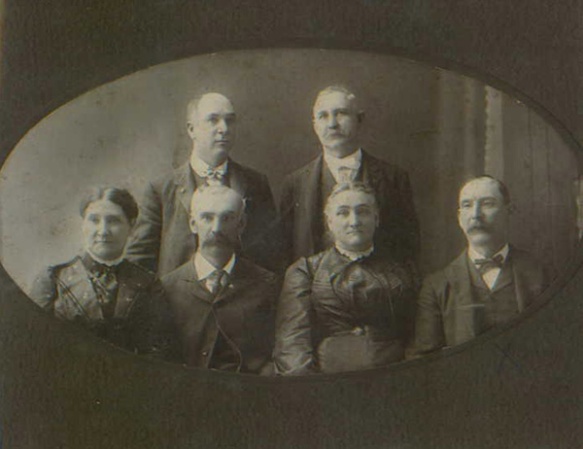 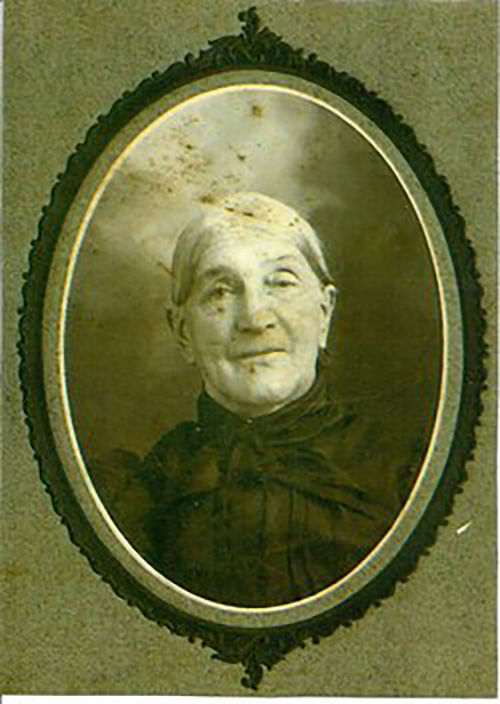 The Pacific Coast Scenic Company worked up and down the Pacific Coast, as the name implies. A year before William’s death the following notice was found in the Oakland Tribune in California on September 12, 1912. The Orpheum Theatre was showing “The Call for the Wild” in Oakland and announced that the “new scenery for the production was painted by William Grabach in his Portland Studio”. Going back to 1906 William’s wife Emma was the Vice President of the Company. After his death she continued on as the President. On Wednesday July 26, 1933 The Evening Herald from Klamath Falls, Oregon noted that “Scenic Pictures of Klamath Filmed by R. R. Howard, photographer for the Pacific Coast Scenic company at Medford, has been in Klamath Falls filming prominent features of the Klamath country. The pictures have been taken exclusively for Louie Polln, who will act is agent for the company in this region. Activities of the Pacific Coast Scenic company extend through the northwest.”[1] And so the Company thrived long after Williams death. The 1920 Census shows his widow Emma was a Seamstress for the Company. 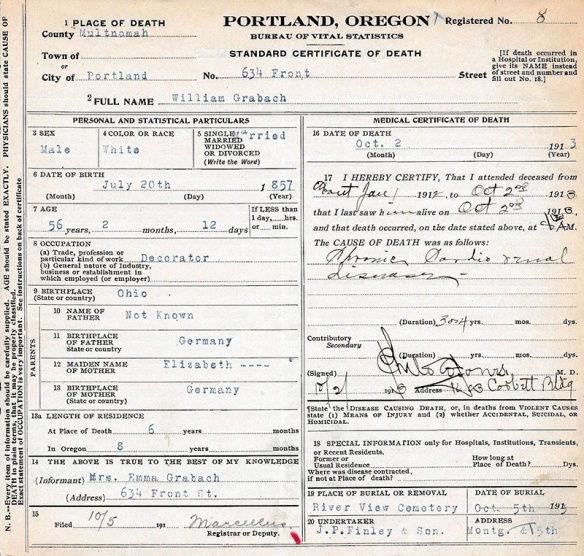 William Grabach died at his home at 634 Front St. in Portland on October 2, 1913, the following notices were placed in the papers in Portland and in Cylde, Ohio.
SCENIC PAINTER IS DEAD
William Grabach Succumbs to Paralysis, Aged 56 Years.
A victim of paralysis, William Grabach, a noted scenic painter, died at his home in this city Thursday.
Mr. Grabach was 56 years old. He came to Portland in 1905 to paint scenery for Belasco & Mayer when they opened the Belasco Theater, afterward known as the Portland and the Hellig. When they abandoned his field, Mr. Grabach remained and opened the Pacific Coast Scenic Studio, which occupies a large plant in South Portland.
Sr. Grabach is survived by his widow, a son and a daughter, who is on the stage. Funeral services will be held at 12:30 P.M. Sunday at the Scottish Rite Cathedral by the Masonic Blue Lodge.
[The Oregonian, 4 Oct 1913, p9] 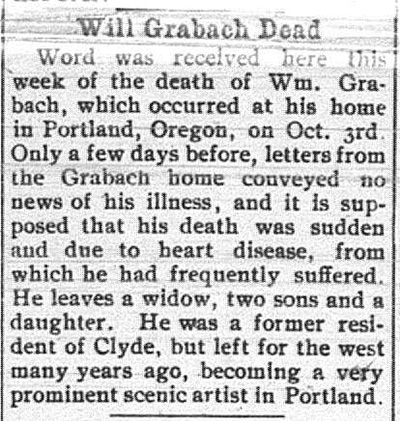 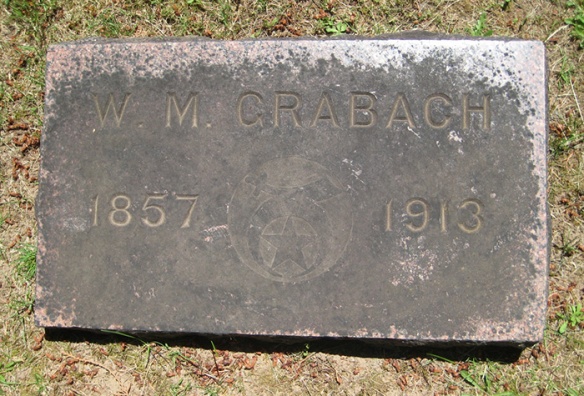 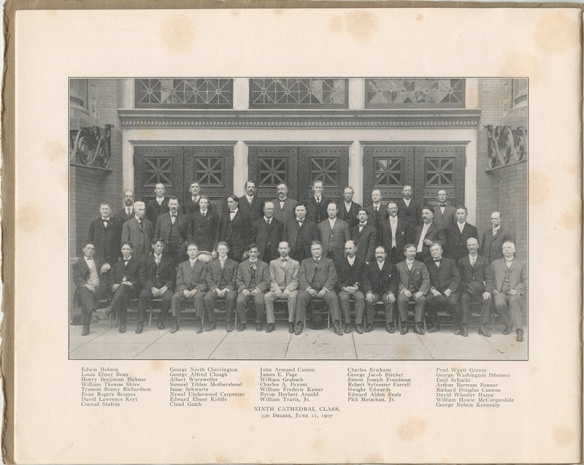 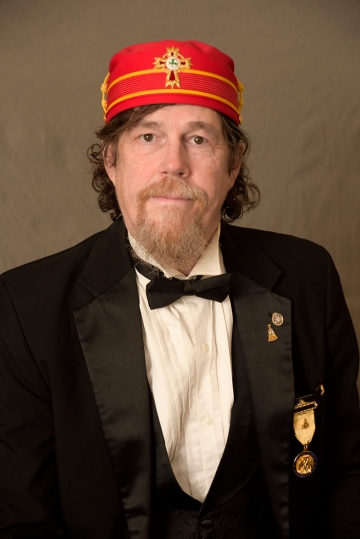 Michael D. Robinson 32° KCCH, earned his degree in History at Colorado State University. He was the second Master Mason Raised in Esoterika Lodge #227, and the first member Raised in that Lodge to serve as Worshipful Master. He was presented with the Hiram Award by Esoterika Lodge in 2012, and was elected Master in 2013 and 2014. He served as District Deputy for District #13 in 2016-17 and 2017-18, and was appointed Grand Historian for 2018-19. He is also serving as Historian for Research Lodge #198 and Eugene Lodge #11. Brother Robinson received the Scottish Rite degrees in 2010 and was the recipient of the “Novus Astorum” from the Portland Valley Scottish Rite that year. He was appointed Historian of the Scottish Rite Orient of Oregon in December of 2014. In March of 2015 he was made Secretary of the Eugene Valley, and Director of the Work for that Valley in January of 2017.